Ayoung An, known as Anna Arietti, was born in 1991 in Seoul, South Korea. She has been fascinated by music and violin making since her childhood. To experience the world, in 2008, she began journeying across the United States. In 2011, she attended the world-renowned Antonio Stradivari School of Violin Making in Cremona and studied under the guidance of Pier Luigi Aromatico Fantoni. Upon graduating in 2015, she participated in a number of competitions and has garnered many achievements and awards:
The “Award Personality” medal at the 2015 International Violin Making Competition in Pisogne
Silver medal at the 2016 International Violin Making Competition in Rome
Bronze medal at the 2016 International Violin Making Competition in Rome.
In 2017, she started work with Edgar Russ to improve her skills, an experience which has influenced her career and style.
In 2020, she opened her own workshop in Cremona, Italy. Ayoung An makes violins, violas, and cellos that each have their own beauty and sound. Through these one-of-a-kind instruments, Ayoung An expresses herself through her works of art. 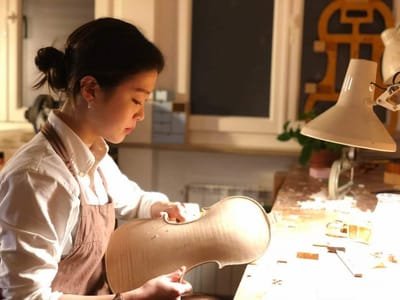